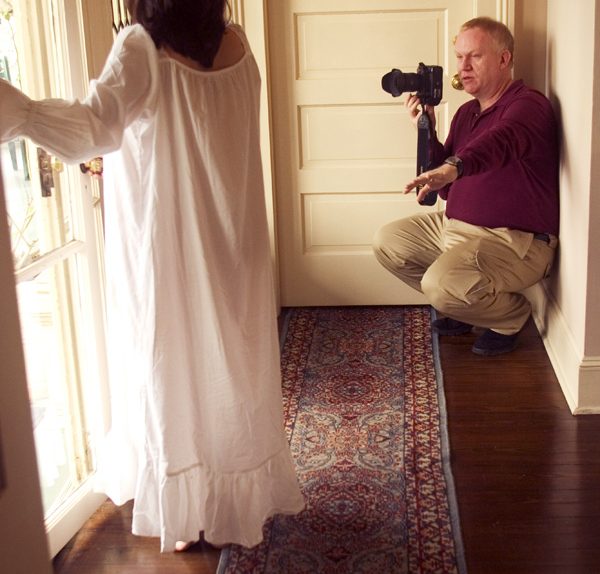 The history of the DSLR is interesting.  In 1889, George Eastman invented film with an emulsion coating on a cellulose nitrate film base.  This allowed photographic film to be put in a roll, and to take multiple pictures.  That same year Thomas Edison was experimenting with an Eastman Kodak camera to capture motion.  His initial experiments were not successful, but as he was updating his approach, a member of his staff called Eastman and asked that they update their film.  Edison’s team requested that Eastman cut the 70mm film in half, and provide sprocket holes on both sides of the film.  Later this was standardized and put into a metal container.

In the 1920’s many compact cameras were developed using this 35mm film – the most successful was the Leica.  Other cameras used “roll film” that was 6cm across with a paper cover.  These cameras became the basis for the twin lens reflex.  In the 1950’s Nikon combined the two ideas into a 35mm camera that allowed the photographer to see through the lens that was taking the picture – the single lens reflex (SLR).  This rapidly became the workhorse camera for both professional and amateur photography.

The 1990’s saw the development of a new imaging technology – a digital sensor.  The digital sensor had been invented during the 1970’s and was becoming something that could be miniaturized to a point where they could put it in a hand-held camera body.  Which camera?  Well, one of the most popular cameras was the 35mm SLR.  It also allowed the major camera companies to leverage their existing base of photographers – you already had a pile of lenses and accessories.  The purchase of the new digital single lens reflex (DSLR) was an evolution as well as a revolution.

However, there are some downsides to the SLR as the host for a new generation of cameras.  The SLR is based on the pentaprism – that hump which sticks up in the center of the camera body.  It allows you to see through the lens using a prism and a mirror in front of the film plane.  Great when you are working with film, but not so much when using digital.  A film camera cannot show you the actual capture – it is important to see through the lens.  The digital sensor on a modern camera can be displayed on the back LCD – it shows you the actual capture before you snap the picture.  The pentaprism is heavy and expensive to produce.  The accompanying mirror is one of the weakest parts of the camera.  Many of the DSLRs do not show you the live capture – the LCD on the back of the DSLR displays the menus and typically shows you the image after the capture.

A well-designed digital camera can abandon 35mm conventions.  No need for a pentaprism, no need for a mirror, the ability to see the live capture.  The capture format does not have to be 36mm x 24mm.  These changes can significantly reduce both the weight and the cost of a camera system.  Changing out a camera system from one vendor to another isn’t a cheap endeavor – but you have good reason and a great opportunity.